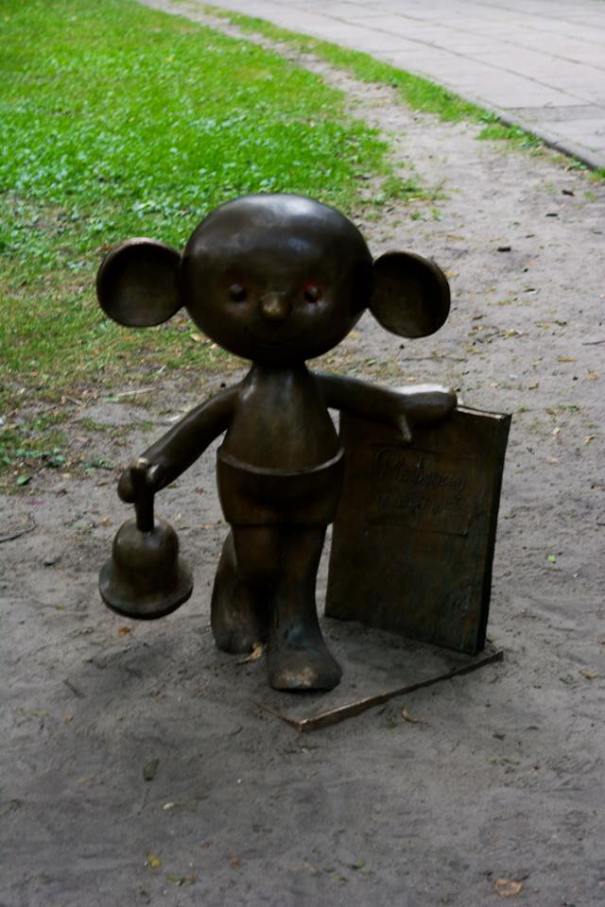 The unveiling of the monument took place October 10th, 2012, the date of starting the third edition of Se-Ma-For Film Festival.

The monument is about 1 meter tall and weighs ten kilograms. In his right hand Plastuś holds a school bell, with which in the TV series he woke up his friends from pencil case every morning. The bell has a real movable suspended heart. Plastuś has his left hand based on his diary. The sculpture stands near the Primary School No. 173 and on the playground in the Henryk Sienkiewicz park, refering to the fact that Plastuś had his adventures on the school bench (the pencil case, together with the indwelling Plastusiem were owned by Tosia – a girl attending primary school).

The unveiling ceremony attended, among others, Zofia Ołdak – director of the show Plastus’ diary. Also present were Radoslaw Stepien – Deputy Mayor of Łódź  and the heirs of copyright of  the Plastus’ character. At the time of the event the statue was partly surrounded by a wooden model of a school pencil case.

In November 2013, vandals poured corrosive liquid over the monument. In December 2013 the sculpture was dismantled and taken back to the renovation. March 21st, 2014, the first day of the calendar spring, there has been a re-unveiling of the monument.