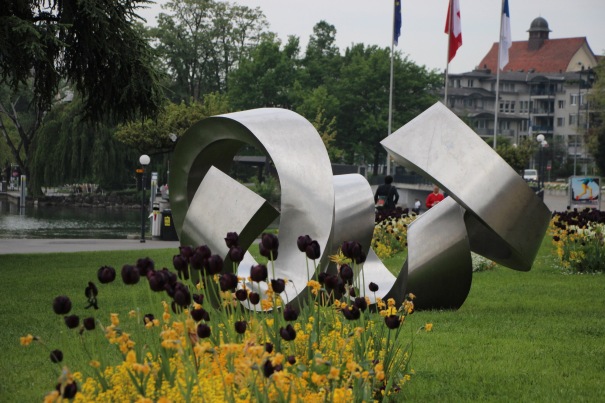 A spring is an elastic object used to store mechanical energy. Springs are usually made out of spring steel. There are a large number of spring designs; in everyday usage the term often refers to coil springs.

When a spring is compressed or stretched from its resting position, it exerts an opposing force approximately proportional to its change in length (this approximation breaks down for larger deflections). The rate or spring constant of a spring is the change in the force it exerts, divided by the change in deflection of the spring. That is, it is the gradient of the force versus deflection curve. An extension or compression spring’s rate is expressed in units of force divided by distance, for example lbf/in or N/m. A torsion spring is a spring that works by twisting; when it is twisted about its axis by an angle, it produces a torque proportional to the angle. A torsion spring’s rate is in units of torque divided by angle, such as N·m/rad or ft·lbf/degree. The inverse of spring rate is compliance, that is: if a spring has a rate of 10 N/mm, it has a compliance of 0.1 mm/N. The stiffness (or rate) of springs in parallel is additive, as is the compliance of springs in series.

Springs are made from a variety of elastic materials, the most common being spring steel. Small springs can be wound from pre-hardened stock, while larger ones are made from annealed steel and hardened after fabrication. Some non-ferrous metals are also used including phosphor bronze and titanium for parts requiring corrosion resistance and beryllium copper for springs carrying electrical current (because of its low electrical resistance).

Simple non-coiled springs were used throughout human history, e.g. the bow (and arrow). In the Bronze Age more sophisticated spring devices were used, as shown by the spread of tweezers in many cultures. Ctesibius of Alexandria developed a method for making bronze with spring-like characteristics by producing an alloy of bronze with an increased proportion of tin, and then hardening it by hammering after it was cast.

Coiled springs appeared early in the 15th century,[1] in door locks.[2] The first spring powered-clocks appeared in that century[2][3][4] and evolved into the first large watches by the 16th century.

In 1676 British physicist Robert Hooke discovered Hooke’s law which states that the force a spring exerts is proportional to its extension.

When the spring will be stretched too much is only a matter of time before it breaks, and the device which worked thanks to it will cease to function. When society is pulled from each side by offering lies and propaganda instead of good, thoughtful and above all effective solutions to the socio-economic and health system then it is only a matter of time before the bubble of lies burst. A government acting only based on the society will cease to have a reason for being. The clock is already counting down!