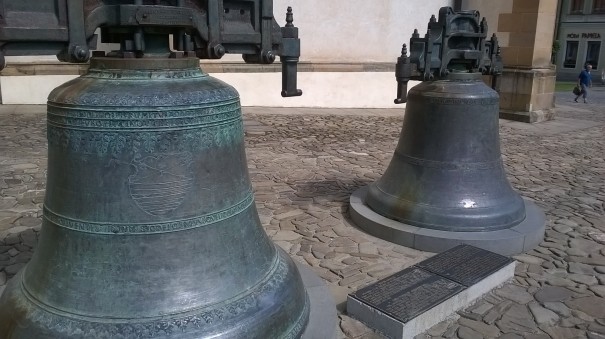 The „Urban“ church bell
The original bell was made from older material in 1584 and was cast by a bell maker Jan of Tarnov and his son Jan. The latin inscription of the bell shows that it was duping during the reign of Rudolf II in 1685. The bell cracked and an unknown bell-maker recast it in its original form. The bell diameter is 162 cm. Its height without the headpiece is 135 cm and it weighs 4000 kg

The „Jan“ church bell
A gothic church bell from 1486. The old German inscription on the bell says that it was made by master Jan Wagner of Spišská Nová Ves, to honour the Lord, the Virgin Mary and Saint Giles. The Bell is 140 cm. in diameter and 120 cm. tall (without its headpiece), and it weighs 2200 kg. It was cast right in Bardejov, and served the church and the town continuously until 1990

The Sound of Silence

And in the naked light I saw
Ten thousand people, maybe more
People talking without speaking
People hearing without listening
People writing songs that voices never share
No one dared
Disturb the sound of silence

„Fools” said I, „You do not know
Silence like a cancer grows
Hear my words that I might teach you
Take my arms that I might reach you”
But my words like silent raindrops fell
And echoed in the wells of silence

And the sign said, „The words of the prophets