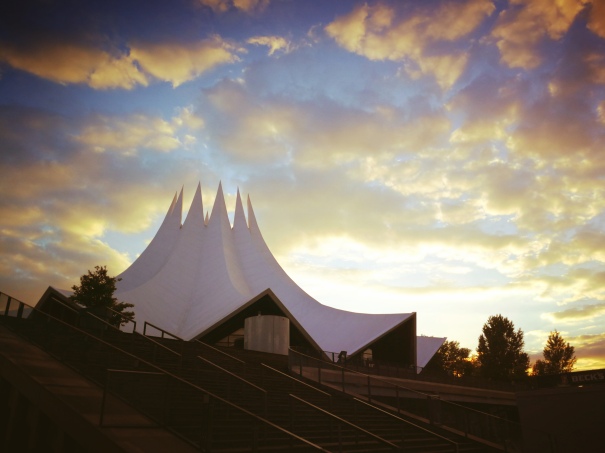 The Tempodrom is a Berlin venue that was first established in 1980 by heiress and former nurse Irene Moessinger as an alternative venue on the west side of Potsdamer Platz in the immediate vicinity of the Berlin Wall.

With private donations, a compensation payment and state subsidies, a concrete building in the form of a circus tent was erected on the site of the former Anhalter railway station and reopened as the New Tempodrom in 2001.

The new Tempodrom building was designed by Doris Schäffler and Stephan Schütz, employees of the Hamburg architectural office Gerkan, Marg und Partner. The roof, reminiscent of Oscar Niemeyer’s Brasília Cathedral, is based on the shape of a circus tent and with its futuristic, white forms forms a contrast to the remains of the former railway station. The foundation stone was laid on 21 May 2000. It was ceremoniously opened with the presentation of the European Film Prize on 1 December 2001.

The massive overrun of the planned construction costs (32 million euros instead of 16 million euros) led to the resignation of Peter Strieder (SPD), Senator for Urban Development, on 7 April 2004. Since August 2005, the Tempodrom has been managed by a management consultancy company appointed by the insolvency administrator. Irene Moessinger withdrew from Tempodrom in July 2005.[3] In the course of the insolvency, court proceedings were instituted against the former managing directors, Irene Moessinger and Norbert Waehl, for breach of trust. The proceedings ended with acquittals.

On 23 April 2010, the Bremen-based KPS Group took over Tempodrom It thus escaped the threat of a foreclosure auction that the lender, Landesbank Berlin, had requested.

I wonder if anyone will bear any political and possibly criminal responsibility for the investments of the current governmant, spending or planning to spend tens of billions of zlotys on investments such as the Central Communication Port or the bridge in Przytoczna, which would connect the Notecka Forest with floodplain areas, fields and forests – no needed investment   by anyone.